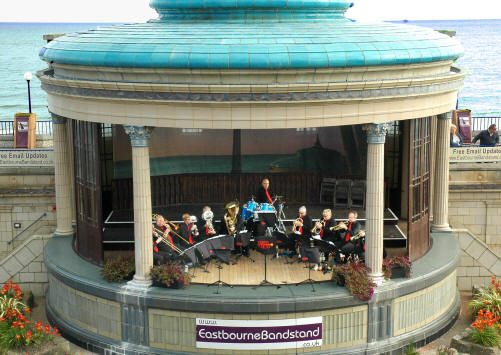 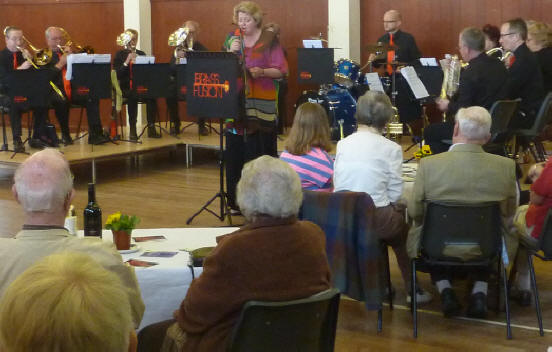 The band again teamed up with local singer, Sidonie Winter, this time to perform entertaining favourites, such as Solitaire, On My Own, and We’ve Only Just Begun. 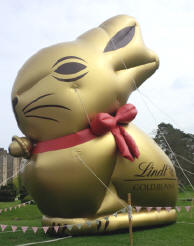 The band performed for visitors enjoying the castle gardens, as well as a family of ducks and a very large Easter bunny. 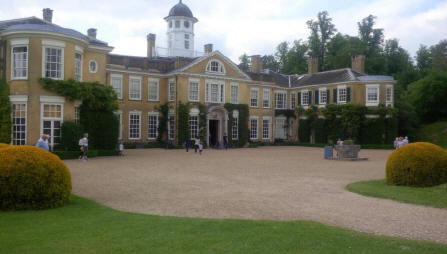 BRASS FUSION was the first band of the year to play at the National Trust’s Easy Jazz Sunday events at the beautiful Polesden Lacey in Surrey.

The band played two short concerts of swing, latin, blues and jazz numbers to an enthusiastic audience relaxing on lawns in front of the house.

BRASS FUSION is delighted to be returning for another date on Sunday 7th September, when we’ll be playing from 1pm-5pm. 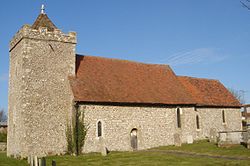 BRASS FUSION’s lunchtime concert in the grounds of St Helen’s and St Richard’s Church, Hangleton, was part of the village’s first music and arts festival.

The group also played hymns inside the church for the Pentecost Mass, led by the Bishop of Chichester.

Brass in the Gardens 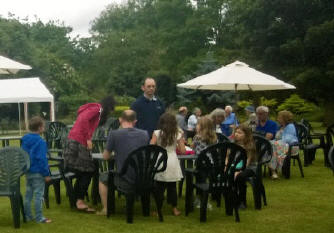 Two hours of toe-tapping music from BRASS FUSION in Red Oaks gardens marked the end of day one of Henfield’s annual arts and gardens festival.

The group played a full programme of favourites, including Gershwin’s Strike UP The Band, the theme to Hawaii Five-0, 76 Trombones, Acker Bilk’s Stranger on the Shore and Enya’s Watermark.

BRASS FUSION will be back in the village later this month for the fete and Proms in the Park. 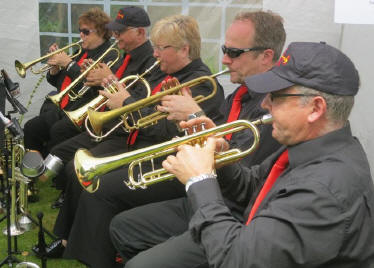 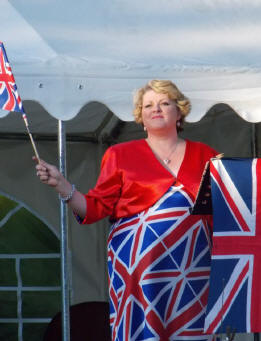 Hundreds of music-lovers made their way to Red Oaks in Henfield for BRASS FUSION’S proms and pimms evening.

The first half of the concert showcased solo performances by the band, including The Bear Necessities by Sian Buss on tuba, and special arrangements to mark the 100th anniversary of the start of World War 1.

The second half featured Proms Night favourites led by Sidonie, including Jerusalem, Land of Hope and Glory and Rule Britannia. 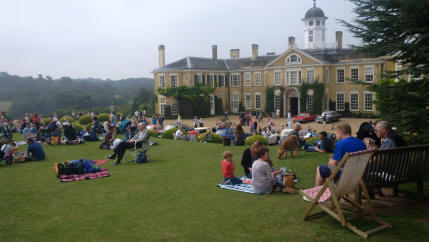 BRASS FUSION played to hundreds of visitors relaxing in the sunshine at the National Trust Donkey Derby at Polesden Lacey, near Dorking.

The group’s performance of Lady Gaga’s Bad Romance got young members of the audience dancing and there was a special request from National Trust staff and volunteers for the Korean hit, Gangnam Style (which had wowed young families on BRASS FUSION’S first visit to Polesden Lacey). Kalinka, Sing Sing Sing and New York, New York also got enthusiastic applause.

BRASS FUSION opened its debut concert at Eastbourne Bandstand with a bold riff from the theme to TV’s The A-Team segueing into Aaron Copeland’s Fanfare for a Common Man.

The 90-minute show, selected from the group’s wide repertoire, ranged from traditional favourites such as Amazing Grace, to the vurtuosity of the Harry James Trumpet Concerto, played by Martin Buss.

The audience were delighted by the teddy that appeared from the bell of a tuba during Bear Necessities, (soloist Sian Buss) and the knock-about humour during Steve Smythe’s feature, The Laughing Trombone.

The concert closed with two of BRASS FUSION’S most popular swing numbers, Sing, Sing, Sing and New York, New York.  Many thanks to Brian Grindall for compering the concert with his usual professionalism, despite no working microphone.

This was the first time the Yorkshire-based group had played in the south for more than 20 years and the audience at Uckfield Civic Centre was thrilled with the result.

The group lived up to its reputation of virtuosity and the highest standards of technical proficiency and artistic musicality. The evening was also hugely entertaining. So it came as no surprise when the group won two standing ovations.

The programme combined a mix of well-loved favourites, such as Gershwin’s Strike up the Band, with pieces specially-arranged by members of the band, such as Chatanoog Choo Choo, Chicago and Warches and Maltzes (where marches were played in waltz time and the waltzes as marches). 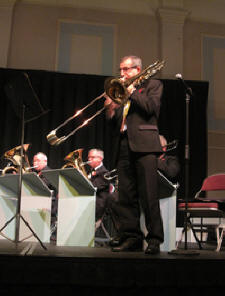 The second half opened with the jazz classic Just a closer Walk, took in The Nearness of You with trombone soloist Kevin Holdgate, and Nothin’ Like A Dame. The final number, Hava Nagila, got the audience on its feet way before the end.

The two groups played through pieces from the previous night’s concert by Versatile Brass and from BRASS FUSION’S repertoire.

Joint concert with the Bothy Singers

BRASS FUSION and the BOTHY SINGERS joined forces for a concert marking the start of advent.

The programme included popular numbers from both groups’ repertoires, a selection of festive music and a finale when singers and performers joined together for a specially-arranged joint number combining Holding out for a Hero and the theme from Phantom of the Opera. 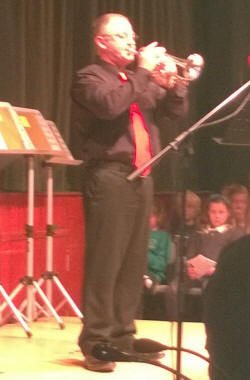 It has become part of Henfield tradition for BRASS FUSION’S Martin and Sian Buss, along with daughter Amy, to play a cornet fanfare to launch the village’s annual Christmas Starts Here event.

This year was no different and, as usual, members of BRASS FUSION also accompanied the community carols and played a selection of festive music.

This year’s BRASS FUSION Christmas show got off to a dramatic start with a driving drum solo followed by the opening to the TV classic, A-Team.

Just when the audience were settling down for the next piece, trumpeters, Andy Hodges and Martin Buss appeared at the back of the hall and launched into Fanfare for a Common Man.

The programme continued to surprise with a mixture of virtuosity, novelty numbers, traditional Christmas music and hits from the charts. Thanks to Brian Grindall for compering and Amy Buss for photography.

BRASS FUSION finished the Christmas season with the always popular candlelit service, which this year filled St Andrew’s to capacity.

The group played festive music as the audience arrived and accompanied the carols during the event.